The 2014 legislative session was about more than just minimum wage. 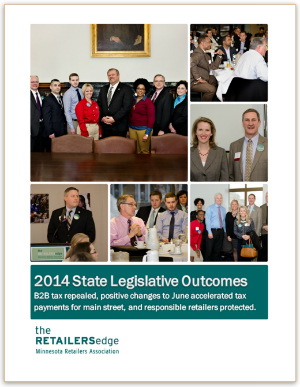 The 2014 legislative session was about more than just minimum wage. Curious what passed that will impact your retail operation?  The Minnesota Retailers Association has released it's session outcomes report., highlighting nearly three dozen issues that passed or failed.

Here is a quick preview from the report introduction by Board Chair Mike Hiltner and Legislative Policy Committee Chair Jeff Lindoo:

Under a challenging legislative environment, MnRA is pleased to announce:

To received a copy of the 2014 State Legislative Outcomes report, follow the appropriate link below.

Minnesota Senator Al Franken, in bipartisan action with Illinois Senator Mark Kirk, on April 11 introduced legislation (S. 2253) for a three-year delay in implementation of an employer-paid $63 per-person tax provided for under federal healthcare reform. The tax funds a temporary "reinsurance" program that not all businesses are eligible to participate in, creating a situation where some retailers pay in to the program but receive no benefit.

In introducing his Health Care Fairness and Stability Act of 2014, Senator Franken said, "My number one concern is to make sure the Affordable Care Act works for the people of Minnesota. We need to keep moving forward and fix the things that aren't working. Businesses and workers all over Minnesota are concerned about this. Our bipartisan bill would provide relief to employers and workers, and it helps keep costs down for businesses across the country."

"At a time when retailers are digesting the impact of federal healthcare reform on their operations, we appreciate Senator Franken's leadership on an effort to delay the collection of the transitional reinsurance tax. We are hopeful that the Senator's effort will allow the time needed to find a better, fairer funding mechanism for this program," commented Minnesota Retailers Association president Bruce Nustad.

Retailers and employers of all size are negatively impacted by this tax, sometimes referred to as the "belly button" tax because it is assessed for each employee, spouse, dependent and retiree covered by a fully-insured or employer-sponsored, self-insured group health plan. In addition to delaying implementation of the tax, the Health Care Fairness and Stability Act of 2014 proposes to reduce the amount collected for the program by aligning the tax with the actual financial need of the program.  Also, in the U.S. House, bipartisan legislation (H.R. 3489) was introduced last November to repeal the fee.

The Minnesota Retailers Association thanks Senator Franken and co-sponsor Senator Amy Klobuchar, as well as the International Franchise Association, National Retail Federation, and Retail Industry Leaders Association for leadership on this issue.

Written by Bruce Nustad on Friday, 09 May 2014. Posted in Retail Operations, Policy & Politics

Retailers Have 100 Conversations With Legislators

Retailers from across Minnesota descended on the State Capitol Thursday, sharing their stories with legislators in more than 100 meetings.  The effort to help legislators understand the impact of their decisions on communities, jobs, and retail operations took place as part of the Minnesota Retailers Association's annual legislative day at the Capitol.

Minnesota House of Representatives Minority Leader Kurt Daudt welcomed retailers to St. Paul at a morning breakfast, saying "thank you to each of you for what you do in our communities, it makes a difference, and thank you for connecting with legislators today."